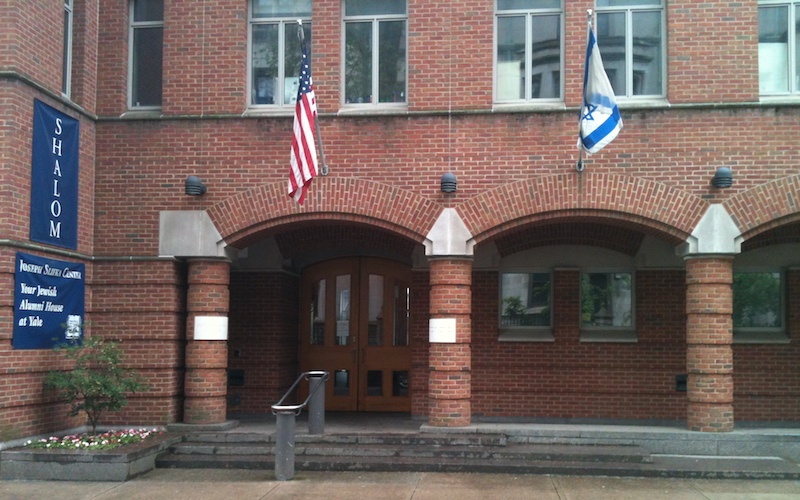 In a nondescript building on Sunday mornings, Yale students brave long lines and mild hangovers for the promise of free bagels and smoked salmon. But here at the Joseph Slifka Center for Jewish Life at Yale, there’s no such thing as a free lunch. Behind the glossy posters of Jerusalem and the Dead Sea, a hidden group is pulling the strings to serve its own, sinister interests.

The harder you look, the more alarming evidence you’ll find. Where are the Hebrew professors sneaking off during lunchtime? Slifka. Where was Peter Salovey on Yom Kippur this fall? Slifka. “They practically have Wall Street in their pocket,” one source reported. “Well, at least 80 Wall Street. I think Phil’s Hair Styles has the rest of the block on lock.”

Slifka’s pernicious influence on campus is felt everywhere. Many describe the looming four-story edifice as “Yale’s 15th best dining option” and “a place to pee.” Others have accepted seemingly innocuous invitations to dinner, only to be plied with copious amounts of grape juice and questioned at length about summer camp.

“People think Skull and Bones’ tomb is secret, but it’s nothing compared to Slifka,” said a source close to the center that spoke on condition of anonymity. The Zucker Reading Room, located on the third floor, is rumored to contain such priceless texts as The Big Book of Jewish Sports Heroes, 2006 Edition and The Complete Encyclopedia of American Jewish Acrobats. Slifka’s arcane initiation rituals are another source of mystery. According to our source, “They go way beyond the other secret societies. You have to cut off a piece of your penis with a knife. And that’s just the first round! Some people wait 13 years before finally getting tapped.”

Look at the mainstream Yale media. You may think the dozens of student publications collecting dust outside your dining hall are just resume padding. But dig deeper into the pile and you’ll find the Slifka agenda, lying in wait for someone who got to the dining hall too early and has to wait around for a while. Don’t believe me? Consider the fact that Slifka’s exclusive, 10,000-member panlist includes the chief editors of the New Journal, the Politic, the Yale Herald, the Yale Record, the Yale Seinfeld, the Yale Elder of Zion, and—worst of all—the Yale Daily “Jews.” You heard me right.

But Yale is not the only campus that’s been infiltrated. Some say Slifka is part of a vast network of organizations and student centers with operations at every major university in the country. One Washington University student describes her college as “Totally overrun. It seems like every time I walk into the Barry H. Levites Chabad House I’m surrounded by people with something to hide.” Worse yet, the cabal may extend beyond college campuses. “So I go to visit my grandma at the Hebrew Home for the Aged, right?” one student reported. “There on the wall, I see a copy of Great Jews in Doo-wop and Ragtime, Vol. III. And I’m like, ‘That’s odd, where have I seen this before?’” Where indeed.

So next time you feel like walking to Wall Street and piling your plate with smoked salmon, ask yourself, “Who’s really on the menu?”