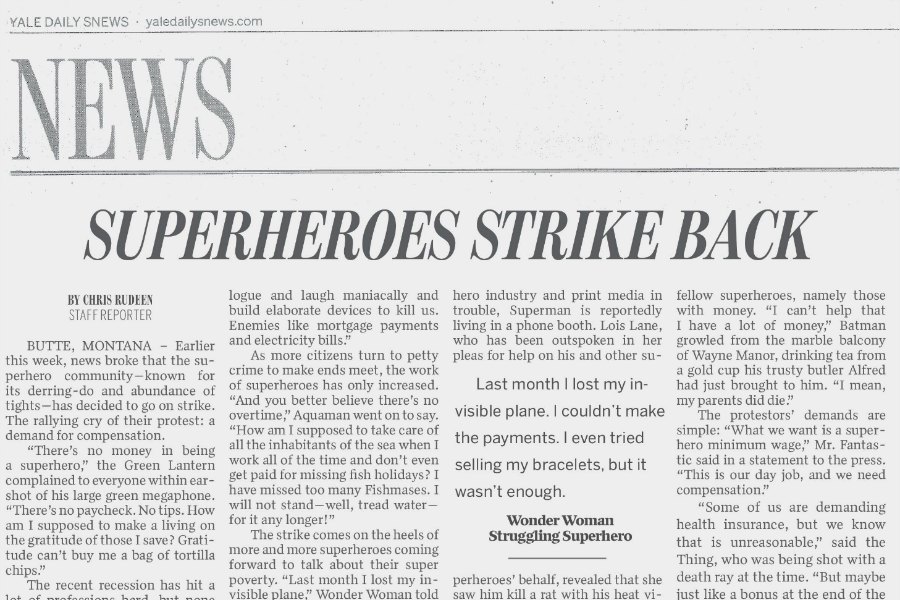 RICHARDSON, NEBRASKA –
As superhero movies continue to
smash box office records across
the United States, unsung heroes
living in the shadows of the Ameri-
can backwoods have come forward
to protest the films’ stereotypical
image of big city heroes.
“It just isn’t me, the life I want
to lead,” said Thomas McDun-
ner, a superhero based in Butler
County, Nebraska, whose uncanny
ability to sense the relative veloc-
ity of moving objects makes him
“more or less interesting, I guess”
to locals. McDunner, or Relativity
Man as he and literally no one else
calls him, spends his days driving
across the county highway looking
for speeding motor vehicles.
“I’m usually pretty fair to these
folk. But when someone goes, say,
fifteen over, I dash to the nearest
pay-phone, enter my loose change,
and wait ten-to-fifteen minutes to
watch the sweet, sweet car chase of
justice.”
McDunner sees his work as
fundamental to the law and or-
der of the community. Yet he is
“no police officer,” he reiterated.
“Those guys are total frauds. Any
civically-minded young adult with
a high school GED or equivalent
vocational training can do that.
This here’s a gift.”
Like most in his community,
McDunner prefers the provincial
life to the never-ending crimes
common in the big cities. To keep
himself occupied, he organiz-
es weekly group discussions on
crime-fighting to “compare notes
and stuff” with other area heroes.
The group, known as Men of Rural
Origins Nationwide, debates the
role of heroes in modern society,
with an emphasis on how the rural
hero can maintain relevance in an
era of increasing competition from
urban rivals.
“I’ve met Superman before,”
said Michael Wiggens, or Crop
Thumper, whose ability to improve
soil quality by as much as seven-
percent in a single yield has made
him an important member of Rural
Origins for nearly four years. “He’s
a fine man, I ain’t pickin’ no fight
or nothin’ . But when he shows up
in Cheyenne County and expects
to fix all ‘er here problems, we’re
gonna tustle,” Wiggens remarked
while icing his freshly blackened
eye. When asked about his injury,
he said he received it from “uhh, a
fall, yeah, let’s go with that.”
Yet Wiggens and the other
members of Rural Origins say they
would not trade their backcountry
lives for anything. “I love it here.
Can’t repl’cate it in some Yan-
kee town out east. E’ryone knows
crops don’t grow in cities. Right?
So, mean, unless they invented u’
way to grow crops inna city, I can’t
e’r leave this place.”
Some even cling to the belief
that their small-town roots will
keep them relevant forever. “These
people’ll always need us,” Mc-
Dunner commented. “So long as
there’s a trucker speeding to get to
a roadside toilet that should have
been at the previously-signed exit,
I’m gonna do just fine here.”