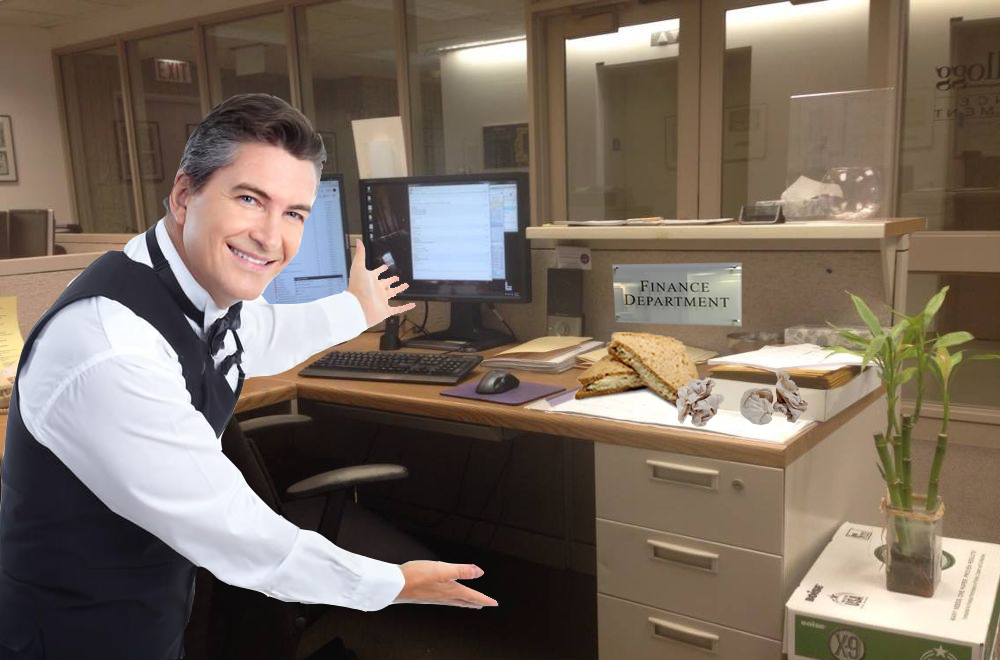 World-renowned megachef Giguère is rumored to have opened a top-secret, pop-up restaurant in the Financial District. As one of NYC’s premiere culinary critics, naturally I was intrigued. I challenged myself to be the first to find this highly anticipated eatery, before all the hype tainted the food. Given Giguère’s appetite for the unconventional, I had a sneaking suspicion this nugget of haute cuisine would be hidden in plain sight. I concluded that, to the untrained eye, this restaurant must look like a nondescript office building. What a delicious deception…

I ventured toward the most unremarkable skyscraper I could see. After a quick tango through the heavy revolving doors, I was greeted by a banal, late-century modern waiting lounge. A disgruntled woman dressed in a vintage security guard uniform stood attentively at the host stand. I proudly requested a table for one.

She feigned confusion, no doubt to throw me off the scent of the restaurant experience of the season.

With a knowing grin I told her, “That’s fine, I’ll just have a seat at the bar,” and continued on. I, too, could play at this cheeky charade.

Follow any large group of people at lunch time and you’ll usually find yourself at the best restaurant in the city. I shadowed a party of well-dressed customers off the elevator to the sixth floor, which had artfully captured the ambiance of a functioning financial headquarters. Corporate Capital Global Investment Partners & Company… my cafe du jour!

I was immediately struck by the avant-garde design of the main dining room: every table was only set for one and separated by gray cubicle partitions. The auteur must have been hinting that too many restaurants were spoiled by the din of chattering customers. After all, the only important conversation should be between you and your meal.

I found my way to an open table with a decorative nameplate, reading “Gwen Tatishore, Assistant to Executive Vice President.” Next to it, a stapler, photos of someone else’s child, and a desktop computer running Windows 10. How charming! I searched the desk for a menu but found only “important business documents,” a sage point by the chef that the idea of a menu has spoiled diners with too many choices.

A waiter introduced himself as the Head of Accounting. He asked, “Can I help you?”

“Sure, I’ll start with water.”

He looked puzzled. “Um… do you have a meeting here?”

“I wasn’t able to make a reservation, but I’m excited to see what you’ve got cooking.”

He furrowed his brow and left, not asking if I had a preference for sparkling or still. Once again, the culinary master subverts the oppressive expectations of fine dining.

After noticing the empty kitchen, I realized it must have been self-serve this whole time! One simply opens the fridge and has their choice of colorful lunch boxes, styrofoam containers, or paper bags, each perfectly crinkled to feign authenticity. My curiosity led me to a seafoam-colored Tupperware, with a Post-It note christening it the “Jeff.”

Having made my choice, I took a seat at a table right beside the refrigerator. I relished my dazzling view of the laminated office recycling instructions.

I thought back on hundreds of experimental delicacies that had danced upon my palate in the past, yet I suspected the meal before me would be different. Would I ever again be able to dine at another restaurant after this scathing meta-commentary? Would I ever be able to eat food again?

When I popped open the container, time stood still. There lay a single sandwich: tuna salad with green onions, crowned by a thin sheet of romaine lettuce, neatly tucked inside two slices of lightly toasted multigrain bread. All the way from the copy room, I heard the tones of a printer wishing me bon appétit.

In an era of flashiness and Instagrammable plates, I tip my hat to those who scoff at the prison of presentation. This simplistic lunch won’t earn you likes, and therein lies its beauty: to make a dish that gives you sustenance instead of social media value. No frills, no side dishes, just the goods.

Not halfway through my entrée, I was yanked out of my reverie by the looming presence behind me. Another patron was eager to discover the magic inside the office fridge. And here I thought I was the only lucky citizen to find this hidden gem! He was dressed the part with his argyle patterned tie and khakis. After opening the fridge, he looked around. His eyes drifted over to my plate and I knew why… he was green with envy at my jackpot meal selection.

I was flabbergasted. Before me stood the reclusive Giguère! Too starstruck to remain tactful, I unleashed a barrage of compliments, citing every detail of the establishment, from the worn carpet to the ceiling panels. Before I had a chance to share my glowing review of his cuisine, he hurried away. Surely to handle the lunch rush.

Soon thereafter, the hostess returned with an aggression that matched her security uniform. I wore her talon-like fingers on my sleeve as a badge of honor while she dragged me away. Our march to the elevator led me past the new patron at the Gwen Tatishore table. I gave her a knowing look and recommended she try the “Jeff.”