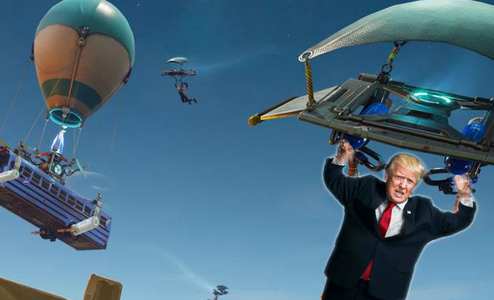 WASHINGTON — President Trump asserted Monday that he would have run in to a heavy spray of gunfire to save the other members of his Fortnite “squad,” even if he was unarmed at the time.

At a White House meeting of American governors, Trump admitted that he wouldn’t know until it happened, but he remarked, “I would run into Tilted Towers to save my friends from Earth_is_flat69 even if I didn’t have a weapon besides my pickaxe. And I think most of the people in this room would have done that, too.”

The President also berated fellow Fortnite player kush-did420, who he had referred to on a Twitter rant earlier in the day as “disgusting” and a “disgrace.” During the meeting, Trump said “I wouldn’t exactly call kush-did-420 a Medal of Honor Winner, all right. I mean, only a coward and a pig hides in a bush while his squadmates are dying.”

This is not the first time the President has been vocal about his Fortnite tactics. Just last week, he bragged about the “beautiful wall” he plans to build to “keep the losers in Junk Junction.”