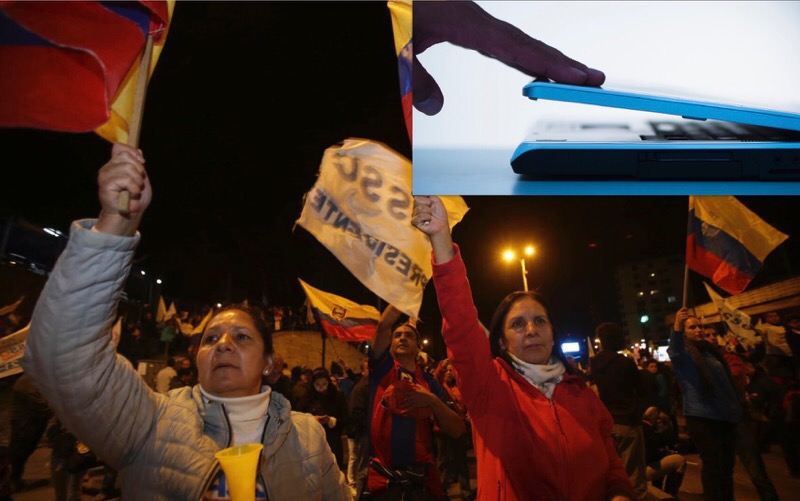 This past week, while American students lived out their regular, tranquil lives—going to Woads, watching Netflix, and writing their senior theses—millions of Ecuadorians found themselves in the throes of a heinous political scandal. Late in the night on April 2nd, the Ecuadorian National Elections Council announced that, contrary to the results of three well-regarded exit polls, incumbent party candidate Lenin Moreno had somehow pulled ahead of challenger Guillermo Lasso and “won” the nation’s presidential election. I’ve decided to take a stand against this blatant instance of election fraud, so until the Ecuadorian government owns up to its corruption and overturns the result, I will refuse to hand in my senior thesis.

In fact, I might not even work on it until then.

This protest isn’t going to be easy for anyone—not for me, not for my advisor, and certainly not for my parents, who keep insisting I “graduate.” Unfortunately, such dissent is necessary. Necessary to protect people like Eduardo Alvarez of Quito and Daniela Perez of Guayaquil, to whom this gesture means so much, probably. Necessary to force 10-year incumbent President Rafael Correa to look at himself in the mirror and ask, “Do I really want to be the reason why ‘Glazed Over: Sexuality and the Porcelain Bowl in American Culture’ never gets read?”

This decision was made all the more difficult by the fact that I have definitely completed lots of work on my thesis. If I hadn’t already put so much time and effort into my paper, this protest would be largely meaningless. Luckily for the 15 million people of Ecuador, I definitely have.

Which brings me to my next point. Dean Fassbinder, DUS Rossi, Professor Liao: would you really feel comfortable giving a student a failing grade just because he cared enough to put others before himself? To penalize me would be to essentially endorse election fraud. Conversely, giving me a very high grade would send a message to all students that this is a place safe for protest and democracy. Which Yale do you want to see?

Just think of the Ecuadorian children. With their futures hanging in the balance, would it be that hard to write down a letter (for example, an A or an A-) in support of my protest? To really drive home your commitment to fair and free elections, you could even toss in a few comments like “This is definitely a completed thesis,” or “I didn’t count the words in this document, but it seems like it’s in the ballpark of 12,500, which is coincidentally the recommended senior essay length in our department,” or even “The digit distribution of the election results in Cotopaxi Province is so improbable, it’s almost laughable, unlike the well-founded conclusions of this paper.” It’s hard to imagine how inspiring that would be.

On a final note, I’d like to address my “History of Mud: A New Hermeneutics” professor from last semester: you can stop emailing me about my “overdue” term paper. I’ve made my stand and my hands are tied. Take it up with Putin.