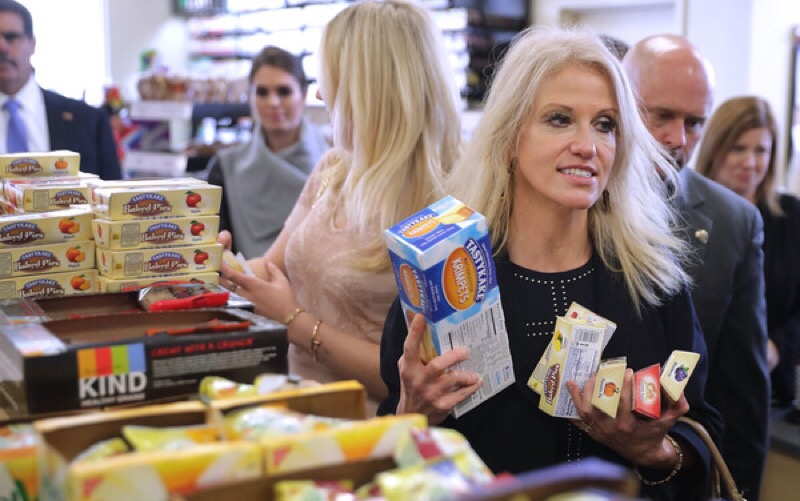 You see the thing is, Ralph, that whether or not it’s paper or plastic, we ran a great campaign and our message really resonated with people. And you know, a large section of America doesn’t really care whether they get paper or plastic. When you ask me paper or plastic, what you’re really asking is “What do the people want?” Some people say that we lost the popular vote. That’s just their opinion— but let me just take a second to say that on the campaign trail I saw Donald Trump really connect with people: paper people, plastic people— it doesn’t matter. We ran a great campaign— and not just the campaign. He’s already doing so much already—

No, but to answer your question Ralph, you see— People feel neglected. Just like the frozen pearl onions in aisle eight. No one’s buying those cold bags of onions, even at clearance prices. The liberal elite have been ignoring them for so long and now it’s their time to speak. But not just onions: people, Ralph. People.

But if I could just back up for one second: Hillary spent more money in Arizona and Georgia than in Michigan and Wisconsin. It’s like if I spent all my money on cold cut ham instead of cold cut turkey: I would simply not have enough cold cut turkey to win the electoral college. It has nothing to do with paper or plastic. No one told her to do that. I don’t need to go into why Hillary’s campaign was poorly run. What I do need is to dig into that tub of cottage cheese with a spork. You see, Hillary’s campaign tried and she lost— and you know what? It’s funny to me that people think that Putin—

Excuse me? Well yes, I heard your question— and speaking of paper, Donald Trump has many papers, as you all saw at our first press conference. He has gotten so much done— He is a very successful and smart businessman and we’re very lucky to have him running this country. You’d be lucky to have someone like him running the produce section or the meat counter here. You just aren’t butchering things as effectively as he would. But besides that, all of these papers, they come to his desk and he signs them. He does so much. Between signing papers and tweeting, he almost doesn’t have enough time to read the papers. Do you know how many papers he’s signed, Ralph? Do you see this bag of croutons? That’s whole 102 crunchy ciabatta chunks, Ralph. I would know. These are all going in my salad tonight: just a wooden bowl full of cheesy dried bread cubes doused in ranch dressing. For each crouton in here, President Trump has signed at least five papers, maybe more— I’m not at liberty to say. And you know what else is on paper? The millions of illegal votes that cost him the popular vote.

And wait one second, let me ask you something. Would you be calling security on me if I was on Hillary’s campaign? I don’t think so.

Also, do you have alternative butter? No, not margarine.