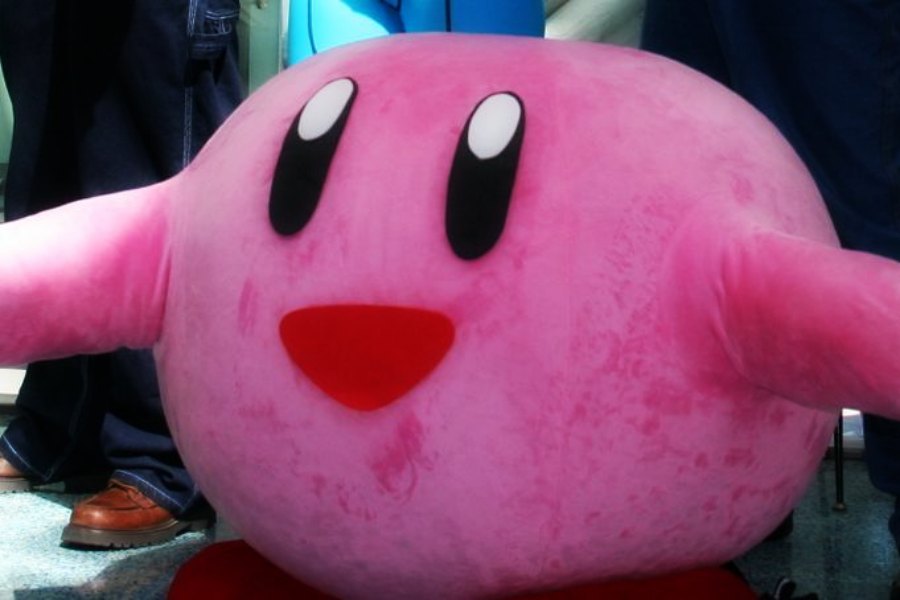 We open with a black screen. A powerful voice breaks the silence.
Narrator: You love Kirby.
A clip of Kirby in Super Smash Bros. begins to play.
Narrator: You love the Iraq War.
A clip of a shrouded woman sobbing.
Narrator: Now, see what happens…
We cut to a shot of a rubble-strewn Baghdad street. A lone fighter,
maybe 17 years old, shell-shocked with an AK-47 in his arms, stands
in the center and overlooks the devastation.
Narrator: …when worlds collide.
Kirby floats cheerfully into the frame, puffing up his iconic cheeks.
Fighter (in Arabic, subtitled): What?
Kirby plops onto the ground, sucking the soldier inside himself and then
giggling. An electric guitar riff kicks in.
Narrator: He can suck up almost anything…
Flash-cut to montage of Kirby sucking
up another fighter, an IED, a mosque
with innocent civilians running from it.
Narrator: …but can he suck up this mess?
Paul Bremer: Kirby, I’ve made the decision to disband
the Republican Guard.
Kirby (puffing and unpuffing his cheeks, subtitled): You
fool! You have undermined the geopolitical and social
infrastructure necessary to maintain order. Tens of thou-
sands may die as a result.
Kirby sucks up Bremer and giggles.
Narrator: He can take on almost any power…
Soldier 1: We need two people who can fly helicopters,
but we only have one!
Soldier 2 (disappointed): Now we’ll never level both
those apartment buildings!
Soldier 1: Not so fast!
Kirby approaches the pilot, sucks him up, and spits him out again. The
camera pans down to Kirby’s chest, where an aviator’s badge is now pinned.
Narrator: …but will he have the power to persevere
when tragedy strikes?
Olivia Munn: Kirby, I love you. Oh no, terrorists!
Terrorists kill Olivia Munn. Sad violin music plays.
Narrator: This Christmas, see the film that has some-
thing for everyone. All the excitement of war and all the
cuteness of your favorite video game character come to-
gether to make…
Title screen.
Narrator: Kirby in Iraq.
Cut to President Bush and Cheney in the Oval Office.
Bush: Say Dick, do you think he has what it takes to
Kurb this violence?
People all across Iraq, including Saddam Hussein hiding in a hole and
a young boy lying in a hospital bed, erupt into laughter.