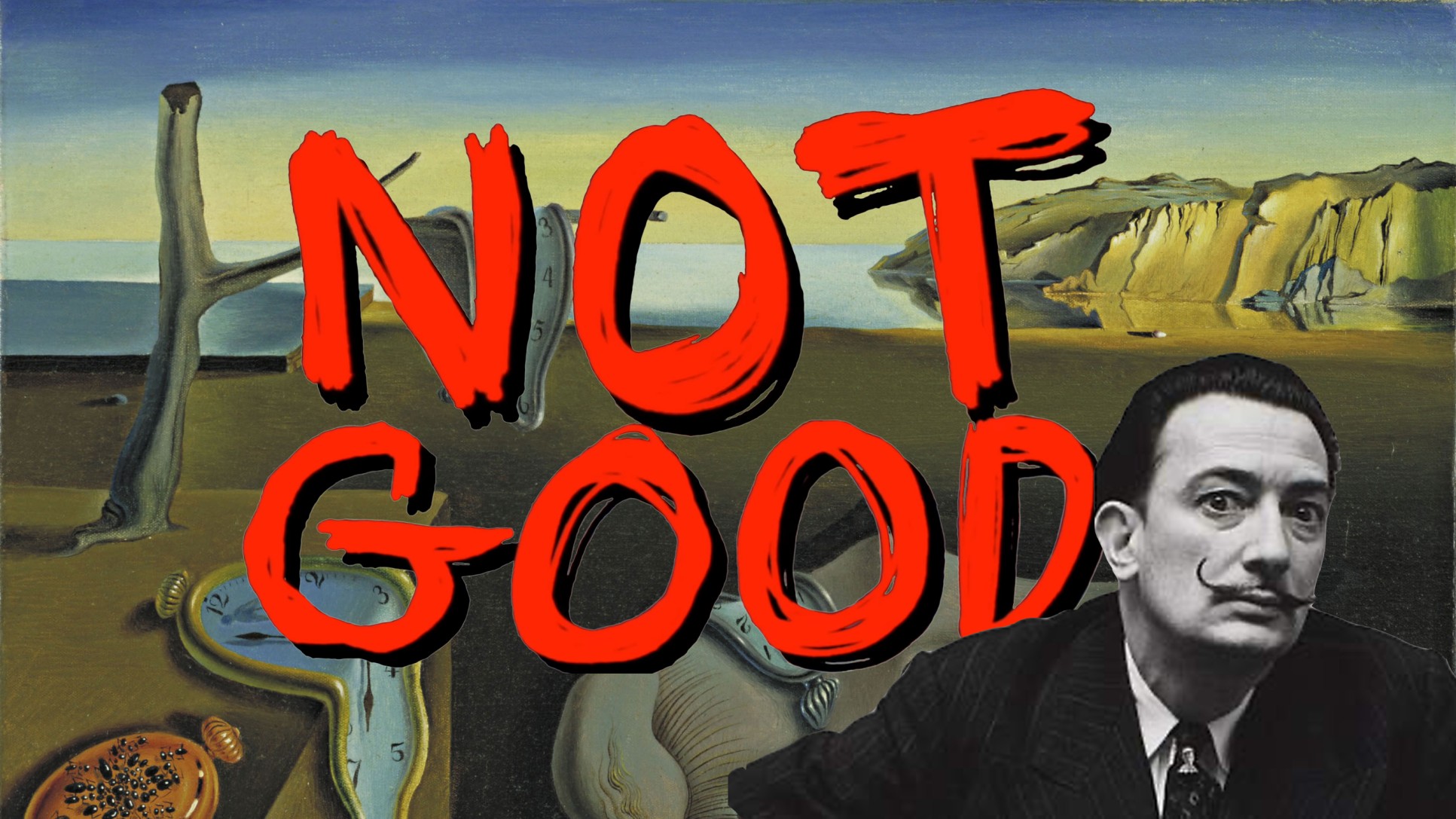 Look, I’m not here to shit on Salvador Dalí. He seemed like a pretty cool guy. He rocked a kickass mustachio and was a total weirdo. But why are we all pretending that this guy was a great painter? The man couldn’t even paint a clock.

A lot of people say that Art is in the eye of the beholder. Well, I say that clocks are circles.

And to you Dalí apologists, I’m tired of the same tired arguments. Oh, Dalí’s clocks are melting? Well, I don’t know about you, but I’ve never seen a clock melt. I once spent a whole summer in Arizona, the sandy oven of America, and didn’t glimpse even a drip from any time-keeping device. And don’t even get me started on the whole “melting represents time” bullshit. As far as I’m concerned, each hour is sixty minutes, and each minute is sixty seconds (plus one for good luck). Time is perfectly linear, like the hands on a clock, which, again, is a perfect circle.

Rest assured, I know a thing or two about circles. My sophomore year of high school, my Trigonometry teacher, Mr. Pearson, would hold circle drawing competitions every Friday morning. The rules were simple: anyone was welcome to come up to the chalkboard and draw their best circle. The winner, as chosen by Mr. Pearson, would get a special prize (usually a pastry from the bakery down the street). Every year, his students would rave about the circle competitions as if they were the Olympics, and if the Olympics were held annually rather than quadrennially.

The competitions totally lived up to the hype. We all had a blast each week giving circles our best shot. I wasn’t half bad myself! But this one kid, Ethan, never participated. Ethan was kind of weird. He had a Transformers lunchbox. He didn’t talk much, and when he did it was usually about Transformers. That was until, one Friday morning in late March, after everyone else had finished their circles on the board, Ethan rose from his seat and silently marched to the front of the class. He pulled a piece of chalk out of his pocket, and you could immediately tell that this wasn’t standard school chalk. This was the good shit, that chalk you could only get from the art store on the North side of town, right off Whole Oaks street. Ethan glanced at Mr. Pearson, who watched carefully. He closed his eyes, took a deep breath, and brought his hand to the board.

For one glorious second, his arm swung mechanically, rotating at the elbow like a human compass. In that instant, the world was simple. Calm. Beautiful. Ethan stepped to the side of the board to let us admire his work.

I don’t claim to have seen God. But as Ethan’s arm whirled in a blur of passion and focus, He was in that room. Michelangelo. DaVinci. Ethan. If the greats have one thing in common, it’s the unrelenting devotion to absolute perfection in their craft. (I like to think the former two would also be Transformers fans, but it’s impossible to say for sure). But Ethan had created what other greats could not. A perfect circle. More perfect than I ever imagined was possible by the human hand. It was as round as the sun and the moon and clock that hung directly above the chalkboard. In one fell swoop, Ethan had established himself as the alpha; Mr. Pearson was his bitch, and grateful to be so.

There are no museums dedicated to Ethan. No books on the life he lived or the work he produced. Yet we celebrate Dalí–a total hack–like he was some kind of genius. Sure, Ethan never officially drew clocks. But if he did, I’m certain that they’d be way better than Dalí’s feeble attempts. Adding the numbers and hands is mere minutiae compared to shaping the perfectly rounded body, and Ethan was a pro at that kind of thing.

Sometimes, I wonder what art history would be like if Ethan hadn’t perished in that tragic white water rafting accident…