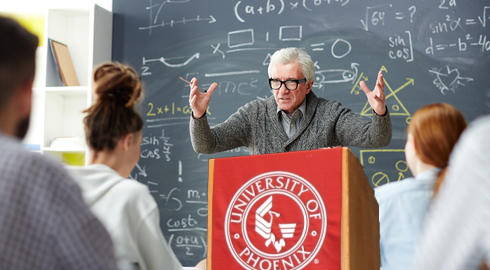 PHOENIX, AZ — In a statement Tuesday, University of Phoenix President Peter Cohen announced that the online institution will begin offering lectures in person for the first time in school history, running at least until April 5th. The unprecedented move comes as schools across the country tell students to not return from Spring break amidst the novel coronavirus outbreak, prompting dozens of schools to convert to online platforms.

“I was just sitting there, thinking about the University, when it hit me: why don’t we have a physical campus, where students and professors can actually interact face-to-face and breathe on each other? That would probably be much more beneficial to learning than just sitting at home watching videos,” Cohen said.

Beyond the academic changes, Cohen is also launching a program to give students more of a full college experience. Students will be encouraged to live in densely-populated group homes Cohen has called “dorms,” where they will be able to cohabitate, socialize, and touch each other outside of class hours. Among Cohen’s more radical proposals are daytime parties, nicknamed “darties,” where students will be able to “day drink, but together and outside now so it won’t be sad anymore.” All pre-existing and new users are asked to log in to their new dormitories by March 15th at the latest.

In the same statement, Cohen announced that University of Phoenix for the first time would field sports teams. “I mean, look at us,” Cohen said, “we have over 100,000 students. Statistically speaking we gotta have enough folks above 6’8 to put together a team of hoopers. Also, basketball games are perfect places for people to congregate in groups of 100 or more, the ideal size of gatherings.”

This new program has, however, faced pushback from tenured professors lamenting the pressure placed on faculty to adapt to 19th century learning models on such short notice.