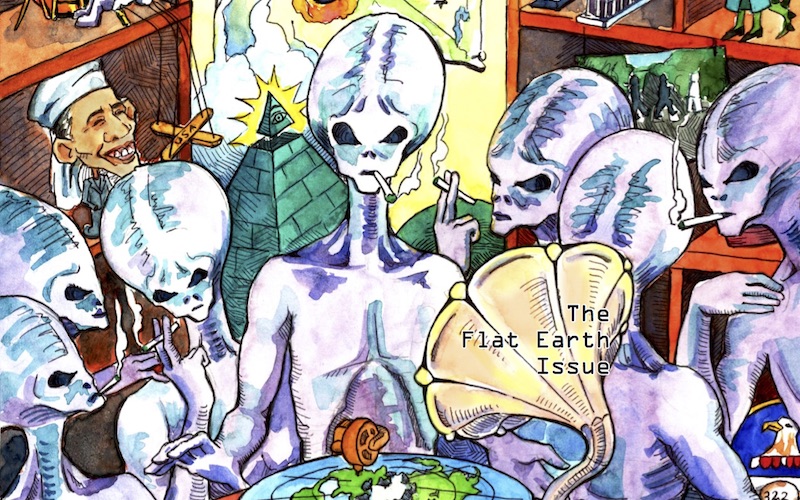 Maybe it’s because I’m really smart, but I’ve never believed in any of the “classic” conspiracy theories. I don’t believe in the “Illuminati” or the “New World Order.” I don’t believe JFK’s assassination was meant to be a “harmless prank.” I don’t believe Amelia Earhart just took a little bit longer than people expected to circumnavigate the globe and then when she finally tried to land she accidentally hit the first tower of the World Trade Center on September 11, 1972. I don’t believe that the government covered the crash up by building a second tower to hide the spot where she hit the first one. I don’t believe that when they realized they had to make it seem like it was the plan all along to build two towers, some dumbass was like “Let’s just call them ‘The Twin Towers’!” I don’t believe Earhart crashed because she was fighting with her navigator over whether she deserved another pair of Kids’ Wings for what was “basically a done deal of a landing.” I don’t believe George W. Bush planned 9/11 as a way to announce his new national holiday, Welcome Back Amelia Day!, a day celebrating “women’s best efforts in STEM,” but then blamed it on Al Qaeda when everybody got mad. I don’t believe he also sent a plane to hit the Pentagon because he thought it should only have four walls “like every other damn building.”

I don’t believe the Navy disposed of Osama bin Laden’s body in the ocean to inspire a “fear of the sea” among millenials who had “lost touch with the fearsome sea.” I don’t believe Navy officials ever issued a statement saying “not to be insensitive, but the greatest terrorist of all is the sea. Weird that everyone is only freaking out now even though the sea has been here for as long as any of us here at the Navy can remember.” I don’t believe that the Navy also said that “wave pools are basically terrorists too” because they “fool people into thinking the sea is their friend.” I don’t believe the Navy pissed in every wave pool in America to “teach people a lesson.”

I don’t believe the CIA is keeping bin Laden alive because he’s “actually really vulnerable” and they’re convinced they “can change him.” I don’t believe he ever told them that his “relationship with his father was basically like 9/11 every day, except worse.”

I don’t believe bin Laden faked his death to “build up hype” for a surprise midnight release of his comeback album “Has-Been Laden” nor do I believe NBC is preserving his corpse for the series finale of The Voice so that the moment his daughter, a finalist, nails her last riff, they can spin Blake Shel- ton’s chair around to reveal that her father’s corpse has been sit- ting on Blake’s lap and listening the whole time, bringing her to tears. I don’t believe this would be the “perfect ending” to a “perfect show,” nor do I think it’s what “the victims of 9/11 would have wanted.” I don’t believe that Osama bin Laden’s daughter and corpse will then do a follow-up interview on Fallon in which Fallon will forgive Osama bin Laden on behalf of all Americans, especially the troops. I don’t believe that Fallon will offer bin Laden’s daughter a spot in The Roots to show that “children should not be held accountable for the sins of their father” before looking directly at announcer Steve Higgins. I don’t believe that Steve Higgins is Jimmy Fallon’s biological father and that he is on the Tonight Show as part of a custody agreement. I don’t believe Jimmy will look at Steve and mouth “This could’ve been us if you’d stuck around.” I don’t believe the camera will pan to Questlove who will be shaking his head like “I don’t get paid enough for this.” I don’t believe the Roots will play the bin Laden family off with a slow-jam version of the diss track “Saddam Who-ssein?” off the surprising chart-topper “Has-Been Laden.”

I don’t believe in conspiracy theories, but I do believe in the people that believe them, or just enjoy them. We hope you enjoy this issue.