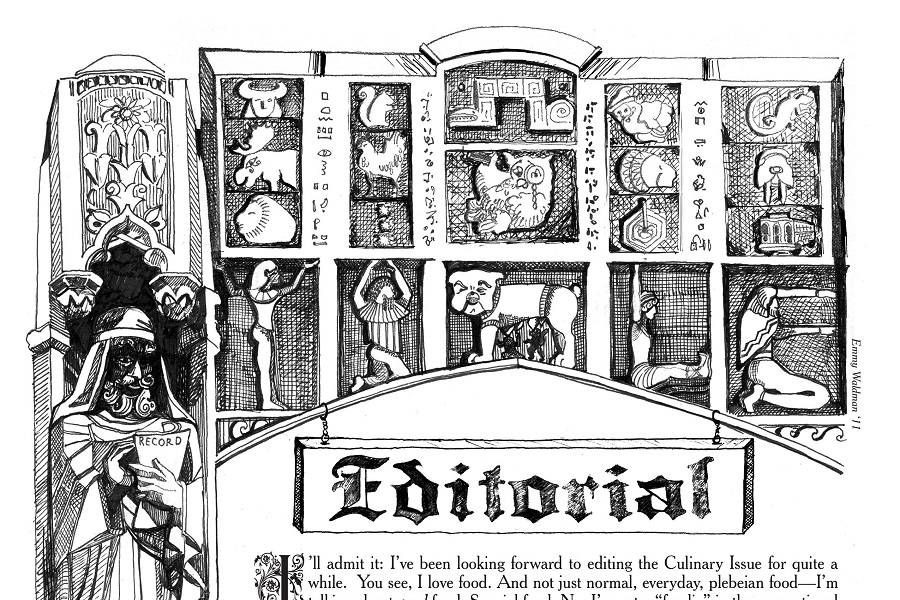 I’ll admit it: I’ve been looking forward to editing the Culinary Issue for quite a while. You see, I love food. And not just normal, everyday, plebeian food—I’m talking about good food. Special food. No, I’m not a “foodie” in the conventional sense. I don’t don a cable-knit sweater, grip a chai latte with both hands, inhale, fill a goblet of rosé, stare at it, Instagram an artfully appointed soufflé, and then waltz off to sleep in my fancy bed du water. I don’t sit in coffee shops for hours on end as a break from sitting in cupcake shops. I don’t pretend food trucks are cute little hidden ethnic treasures—they’re all just slop for the poors.

I love food, though, in a far purer, more meaningful way. A romantic way, you might say. You, dear reader, truly can’t understand this love until you’ve pleasured a donut. Until you’ve pounded some pound cake or rolled around with pigs in a blanket. Until you’ve savored the sweet, sweet je ne sais quoi of chicken semen. But I will try to explain this love to you in the simplest way I know how: with an extended anecdote of questionable relevance.

It all started one fine winter afternoon in the Record office (305 Crown Street, Room 305, come by! Please.). The editorial board and I were hanging out, just shooting the (proverbial) shit, discussing normal stuff (like the sweet, sweet je ne sais quoi of chicken semen). The weather outside was frightful, but the fire we’d set to the next-door Herald office was so delightful. As I basked in its warmth and glow, an idea suddenly occurred to me.

“Hey guys,” I began cautiously. “You know how Commons is closed all the time now?”

“Well, what if we break in…and start our own dining hall!”

The staff responded with enthusiasm.

“Wait, though. Just think about it,” I replied, editor-in-chiefly. “We have a unique opportunity to give the people what they want. Yalies are constantly complaining about food. Together, we can bring the supply to the demanding public! Economics! If we succeed, we’ll have everyone as happy as Teletubbies in a sea of custard! As happy as Paula Dean in a greasy vat of racism! As happy as Chris Christie in a room with some food!”

Everyone cheered. That very instant we set off for Commons, past the dreary, chicken-semen-less dining halls of the residential colleges, past the quivering-block-of-jellowannabe of Beinecke, past the Peabody Museum (we got lost), and finally into the belly of the (proverbial) beast.

We walked into an empty, cavernous building. Kitchen equipment and ingredients were scattered everywhere.

For the next hour we sautéed and marinated and chiffonaded and learned French. We lovingly crafted conquilles Saint-Jacques and blanquette de Veau and soupe l’oignon. Finally, it was time for the pièce de résistance: chicken grueyere a la Yale Record.

Daniel brought out the chickens. So many goddamn chickens. “Ok, slaughterin’ time,” he announced. “Line up.”

We all eagerly grabbed our serrated blades and started cheerfully exsanguinating the birds.

“Wow, this is fun!” Chris announced.

But it quickly dawned on us that there were too many. There was just no way we could cheerfully exsanguinate them all.

“Oh, no, they’re getting away!” cried Ian, who was by this point weeping uncontrollably.

“Corner them!” yelled Natalie, chasing after a particularly feisty one.

They were so feisty, so spunky, so spirited. If I learned one thing from the movie “Chicken Run,” it’s that Claymation is a beautiful art form, and also that chickens are people too or something. How could we kill these beautiful creatures!?

“Stop!” I screamed. “Let them go! Let them go.” I sobbed with relief as the chickens raced off down
Prospect Street, scurrying toward the Yale Farm, or maybe Popeye’s Chicken.

From that day forth I vowed to always cherish all foodkind. I would eat only the most processed, least authentic food, in order to avoid harming any one of God’s creatures. I would join Michelle Obama in her acclaimed “Kill the Fatties” venture. I would finish my novel, “Julie & Julia &Juliet: A Love Story.” And I would celebrate the wonders of food by tricking the staff in to creating a whole Culinary Issue for my own private viewing pleasure.