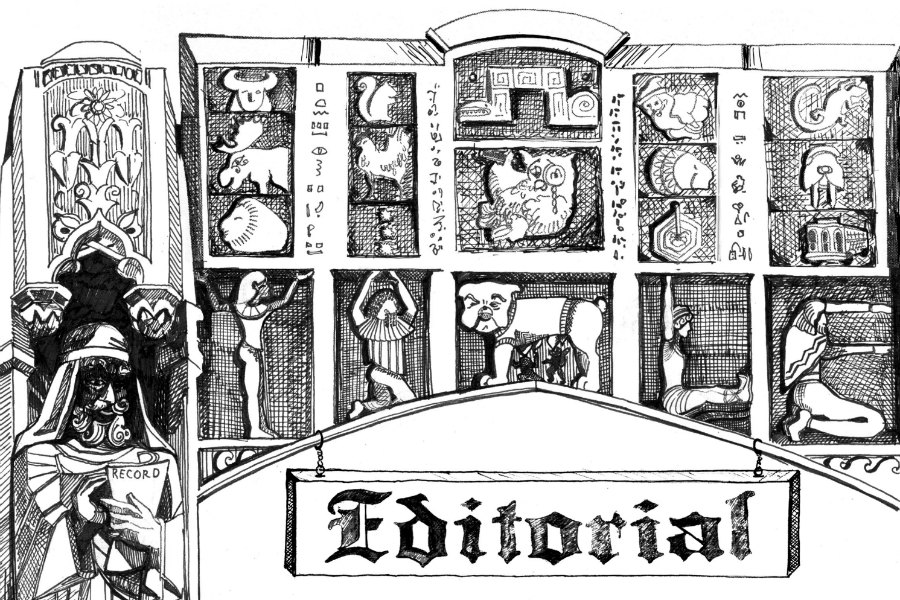 Mwahahahahaha… That’s how I laugh. And that’s how I’m laughing right now. Be-
cause—mwahahaha—I have succeeded in the execution of my evil plan! I have
captured the entire editorial staff of The Yale Record.

It all started as the staff was brainstorming ideas for the Heroes and Villains issue. While
exploring the potential of the word “dastardly” and brainstorming metaphors for the per-
fect Aryan man that are less subtle than Superman, Recordians started to catch whiffs of a
strange smell.

“What is that?” asked Aaron.

All eyes turned to Mitchell, who was stuffing his face with one of his trademark onion-
garlic-goose-liver sandwiches. “Hey guys…don’t look at me!” he managed to blurt out
between bites.

But then he smelled it too, and he couldn’t even finish his sandwich. All of a sudden he
felt…sleepy.

Watching this scene from outside the window, I twirled the tips of my pointy mustache,
because, you know, evil. I thought back on my brilliant, devious, deliciously evil plan. It all
started this one time Scar, Voldemort, Mussolini, and I were all chilling.

“Don’t you think it’s been awhile since we’ve done anything evil of note?” asked Voldemort.

“Mamma mia, I agree,” piped in Mussolini. “We’ve got to plot something sinister!” All
heads nodded.

“How about we murder our brothers and proceed to impregnate our sister-wives?” asked
Scar.

“No, no!” I said. “I’ve got it! We’ll take down the greatest heroes this world has ever
known…the members of The Yale Record. And then the sister-wives thing.”

After that, it was simple. We braved the treacherous journey that was Metro-North and
made our way to 305 Crown Street, deep in the heart of New Haven. We slipped timer-
controlled pellets of propofol—sleeping gas—into the Record’s office. Then, it was just a
matter of waiting.

They arrived, we set off the timer, and the Recordians fell asleep faster than you could say,

“You underestimate the power of the Dark Side.” We tiptoed in, evilly, and tied them up.

When they awoke, there was nothing our young heroes could do.

“Who are you?” asked Madeline.

“What have you done with my sandwich?” asked Mitchell,
eyeing Scar with suspicion.

Of course, being experienced villains, we had all worn
masks. These fools had no idea how brilliant we were.

“We are…let’s just say we’re pretty evil,” I said. “And
we’ve kidnapped you. And now—with no one to stand in
our way—we are going to rid this world of all humor forever.”

“Shut up,” everyone said.

“How are you going to do that?” asked Chris.

“Simple,” I replied. “Time has done much of the work for
us already. Many of the great comedic publications are fall-
ing. Punch died years ago, Mad Magazine only publishes a
couple times a year, and the Harvard Lampoon is little more
than a dorky collection of inside jokes. Fuckers. Even The
Onion is flailing—didn’t they just call that Quvenzhané Wal-
lis girl the C-word?” Everyone nodded.

“Really, it was only Yale standing in the way of complete
humorlessness. What with standup, improv, sketch, and The
Record, Yale is a bastion of comedy. But no longer…mwa-
hahaha…”

“What do you mean?” Natalie asked.

“Well, you’re tied up. We knocked you out with all of our
sleeping gas, but we still have lots of laughing gas. We’re go-
ing to incapacitate this whole campus, and there’s nothing
you can do to stop us!”

With that, Mussolini pressed a button to trigger laughing
gas to go off all over campus. We settled into the surprisingly
comfortable and welcoming Record office to wait. We were
so confident that we even untied the members of the Record.

The gas streamed out and settled across campus and—
nothing. Nothing? What in Gary-from-Pokemon’s name was
going on?

“You miscalculated!” cried Zach, karate-chopping Scar
across the mane.

“Yale is such a funny place—with so many great humor
publications—that everyone laughs all the time,” Sam add-
ed, back-handing Voldemort.

“Everyone laughs so much, in fact, that we’ve all built up
an immunity to laughing gas,” Ethan said, pushing Musso-
lini out the window.

They all surrounded me. Securing my arms, someone
yanked my mask off. They all gasped.

“Yes, it is I! Drew Gilpin Faust. President of Harvard
University and foe of humor everywhere! And I would’ve
gotten away with it too, if it weren’t for you meddling kids…
and your dumb dog!”

“Hey, leave Handsome Dan out of this!” shouted Ben.

And, to add insult to injury, they sat down and finished the
Heroes and Villains issue, which was hilarious, as always.