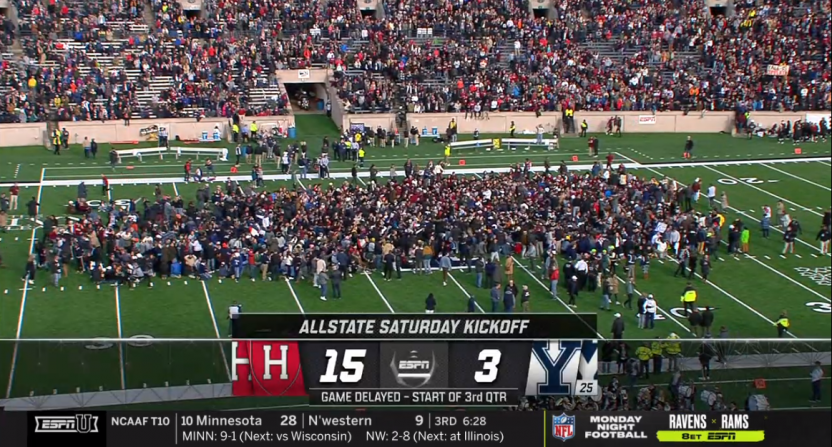 In a Facebook post Sunday sharing a link to ESPN’s coverage of the Harvard-Yale game, local smartass Dan Dyslin ingeniously commented “I’ll bet $20 those protestors drove their Range Rovers to the game.”

At halftime Saturday, dozens of protestors filed from the Yale Bowl stands to protest the investment of Harvard and Yale’s endowments in fossil fuels and Puerto Rican debt. Hundreds of students rushed to the field to join them, and thousands of experts rushed to their keyboards to share their enlightened commentary. Among these experts was the particularly witty Dyslin.

“Sad that the so-called brightest of their generation could be this ignorant,” remarked Dyslin, who regularly comments on articles after reading only the headlines.

Several of Dyslin’s Facebook friends entered the discourse, inspired by his clever invective. “LOL you snowflakes are protesting CLIMATE CHANGE. Climate change can’t hear you,” wrote one of Dyslin’s old high school classmates, completely unaware that the students would not see her comment on Dyslin’s private post in the “East Longview Class of ‘78” Facebook group.

Amongst all the criticism of the protests, many proclaimed that the Harvard-Yale game was not the best time or place for protest. “The football field is a ground walked on by America’s most moral men. It is shameful that these degenerate youth tarnished such sacred earth” Dyslin wrote. “They should’ve let the football players come on the field and beat the shit out of those ravenous animals,” he said of the peaceful protesters.

As with many other fans, Dyslin was understandably frustrated by the delay of the second half. “That’s it. I’m never watching the Harvard-Yale game again,” Dyslin wrote.

Dyslin has never and never will watch an Ivy league football game in his life.