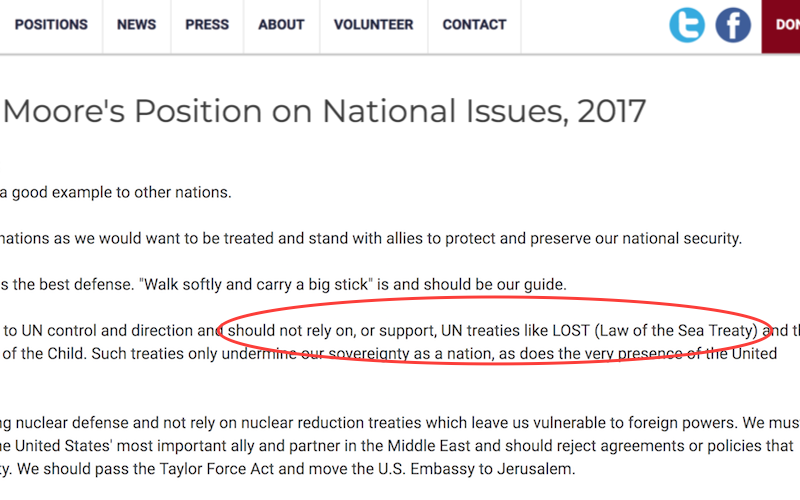 I knew that I took a big risk when I announced my belief that the United States should withdraw from the United Nations 1982 Convention on the Law of the Sea (UNCLOS). Believe me, I heard it from countless voters.

“You’re taking a stand against UNCLOS? You do realize this is Alabama, right?!”

“In the Heart of Dixie, we don’t take kindly to politicians messing with international norms establishing nation-states’ claims to territorial waters.”

“You’re crazy, Roy Moore! If you oppose this international treaty that elicits such passionate support from us Alabama voters, then we will not vote for you, despite the fact that we think you are a principled man of unquestioned integrity and character.”

And yesterday, all of those conversations came true.

All across the state, we saw that Alabama voters were so unable to look past my opposition to a 35-year-old international treaty that they elected the first Democratic Senator in a quarter century. It is clear that this position (and this position alone) was so repulsive to voters that I lost in a state that President Trump carried by 28 points just a year ago. I guess that yesterday, Exclusive Economic Zones extending 200 nautical miles from the baseline of the coastal nation were more important than an exclusive chance to elect someone who is unanimously seen as a really great guy.

It hurts to lose any election, but I feel good knowing that I didn’t compromise on my beliefs—and that it wasn’t anything about me, personally. Besides, to be honest, I never got my hopes up too much. For even the youngest of children know that Alabama just doesn’t vote against UNCLOS—trust me, I asked plenty.