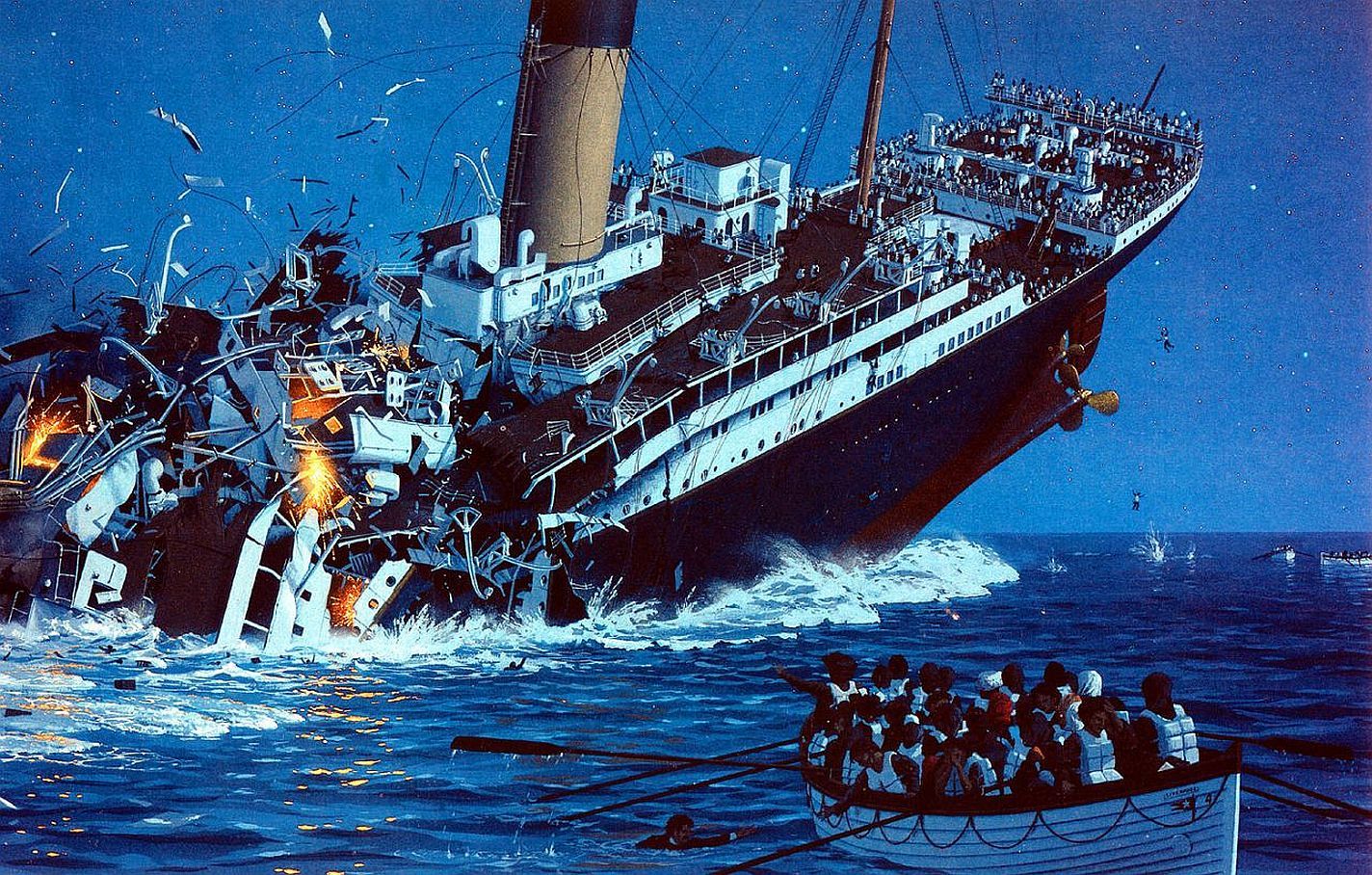 Guys. Hey guys. I think we hit something. And it seems like it might have been…yup. That’s definitely an iceberg. I think the ship might have just run into a giant fucking iceberg, and I think it may have done, like, critical damage to the hull. Yeah, I can already feel us tilting—this is not looking good.

But seriously though…my b. This one’s definitely on me. I mean, I did not see that iceberg at all. Like one minute I’m up in the crow’s nest updating my Snapchat story and the next minute BOOOM!!!! I see it now though. It’s kind of just right underneath us, sort of sticking out the ship. I would ring the bell now, but that might be a little bit…you know.

Well fuck. Guess there’s nothing to do now but wait until we drown. Down into the icy depths of the ocean. The dark abyss. No coming back from that, no siree. I mean, I’m just glad that I’m not the captain—that guy must feel terrible right now.

Anyway…you guys about hear this? You know Leo DiCaprio and that one British chick from the Oscars—yeah, they totally banged. A custodian caught ‘em in one of those old-fashioned cars they got down in the cargo bay. Apparently, they really messed up the leather. I mean really messed it up. White people, huh?

So, back to our impending deaths. I sort of feel like it’s finally starting to sink in!…Get it? Get it, George? Jesus Christ. No, for the last time, I don’t know where you’re fucking daughter is. She probably died of hypothermia already—she’s only 12. Oh and it’s all my fault? Please. I’m not the one that didn’t want to pick her up from her swimming lessons. And, now you’re going over to the starboard side? Like that’s gonna do anything. You’re a bad father, George! You should have spent more time with her! … Jesus, that guy. What a prick, huh?

Wait guys, look down there! Some kids on the lower decks are waving to us. Let’s all smile and wave back! Oh wait, never mind. They’re not waving—they’re flailing desperately while being crushed to death beneath gallons of seawater. And now here come the sharks. Oh boy, that’s awkward…

Hold on a second guys, I got another one…guys, guys…I think we’re gonna need a bigger boat!!! Get it? Because this is like the biggest boat there is. With the most people on it. And they’re all gonna die. It’s pretty funny right? What, you too?… How are you still going on about this! I already said that it was my b!

Really? Like seriously? You’re gonna make me walk the plank a minute before the entire ship sinks? What about that guy over there—he’s using Fat Teddy as a flotation device! Let’s all gang up on him! No? Alright, alright. If this is the end let me just say one last thing…

…Tell George he can go fuck himself.