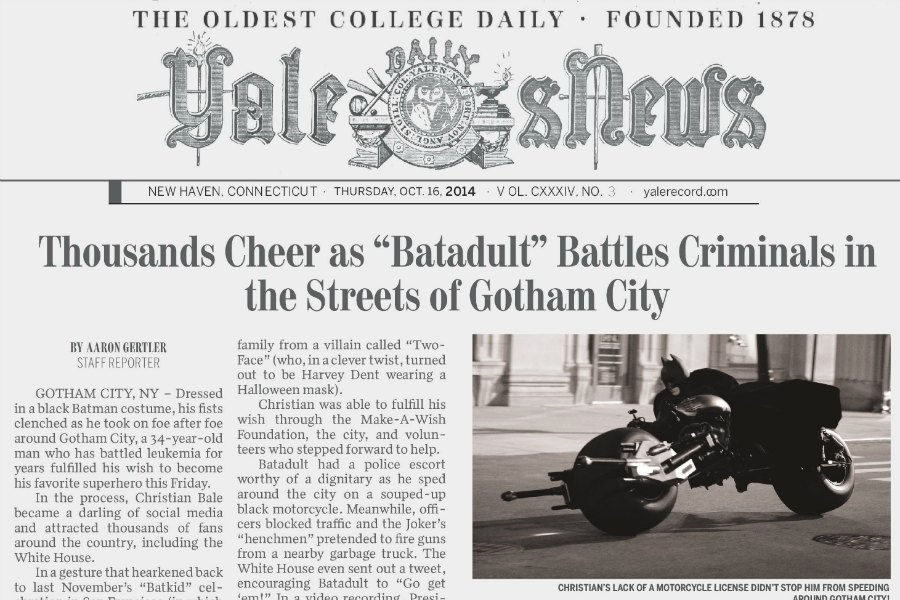 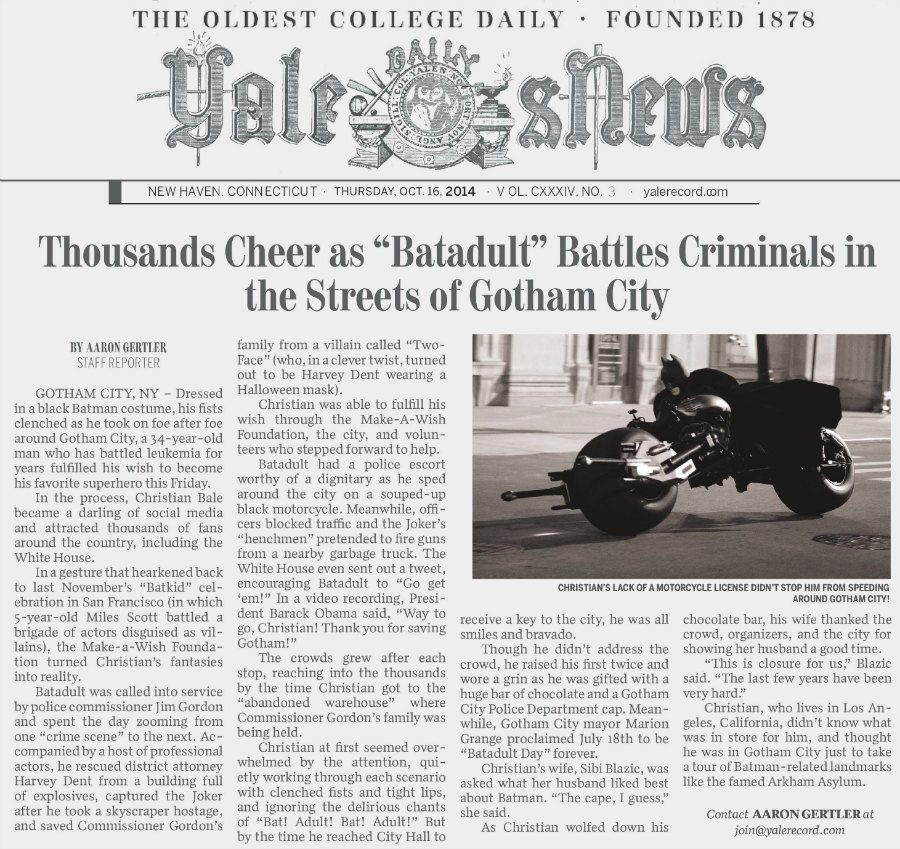 GOTHAM CITY, NY – Dressed
in a black Batman costume, his fists
clenched as he took on foe after foe
around Gotham City, a 34-year-old
man who has battled leukemia for
years fulfilled his wish to become
his favorite superhero this Friday.
In the process, Christian Bale
became a darling of social media
and attracted thousands of fans
around the country, including the
White House.
In a gesture that hearkened back
to last November’s “Batkid” cel-
ebration in San Francisco (in which
5-year-old Miles Scott battled a
brigade of actors disguised as vil-
lains), the Make-a-Wish Founda-
tion turned Christian’s fantasies
into reality.
Batadult was called into service
by police commissioner Jim Gordon
and spent the day zooming from
one “crime scene” to the next. Ac-
companied by a host of professional
actors, he rescued district attorney
Harvey Dent from a building full
of explosives, captured the Joker
after he took a skyscraper hostage,
and saved Commissioner Gordon’s
family from a villain called “Two-
Face” (who, in a clever twist, turned
out to be Harvey Dent wearing a
Halloween mask).
Christian was able to fulfill his
wish through the Make-A-Wish
Foundation, the city, and volun-
teers who stepped forward to help.
Batadult had a police escort
worthy of a dignitary as he sped
around the city on a souped-up
black motorcycle. Meanwhile, offi-
cers blocked traffic and the Joker’s
“henchmen” pretended to fire guns
from a nearby garbage truck. The
White House even sent out a tweet,
encouraging Batadult to “Go get
‘em!” In a video recording, Presi-
dent Barack Obama said, “Way to
go, Christian! Thank you for saving
Gotham!”
The crowds grew after each
stop, reaching into the thousands
by the time Christian got to the
“abandoned warehouse” where
Commissioner Gordon’s family was
being held.
Christian at first seemed over-
whelmed by the attention, qui-
etly working through each scenario
with clenched fists and tight lips,
and ignoring the delirious chants
of “Bat! Adult! Bat! Adult!” But
by the time he reached City Hall to
receive a key to the city, he was all
smiles and bravado.
Though he didn’t address the
crowd, he raised his first twice and
wore a grin as he was gifted with a
huge bar of chocolate and a Gotham
City Police Department cap. Mean-
while, Gotham City mayor Marion
Grange proclaimed July 18th to be
“Batadult Day” forever.
Christian’s wife, Sibi Blazic, was
asked what her husband liked best
about Batman. “The cape, I guess,”
she said.
As Christian wolfed down his
chocolate bar, his wife thanked the
crowd, organizers, and the city for
showing her husband a good time.
“This is closure for us,” Blazic
said. “The last few years have been
very hard.”
Christian, who lives in Los An-
geles, California, didn’t know what
was in store for him, and thought
he was in Gotham City just to take
a tour of Batman-related landmarks
like the famed Arkham Asylum.