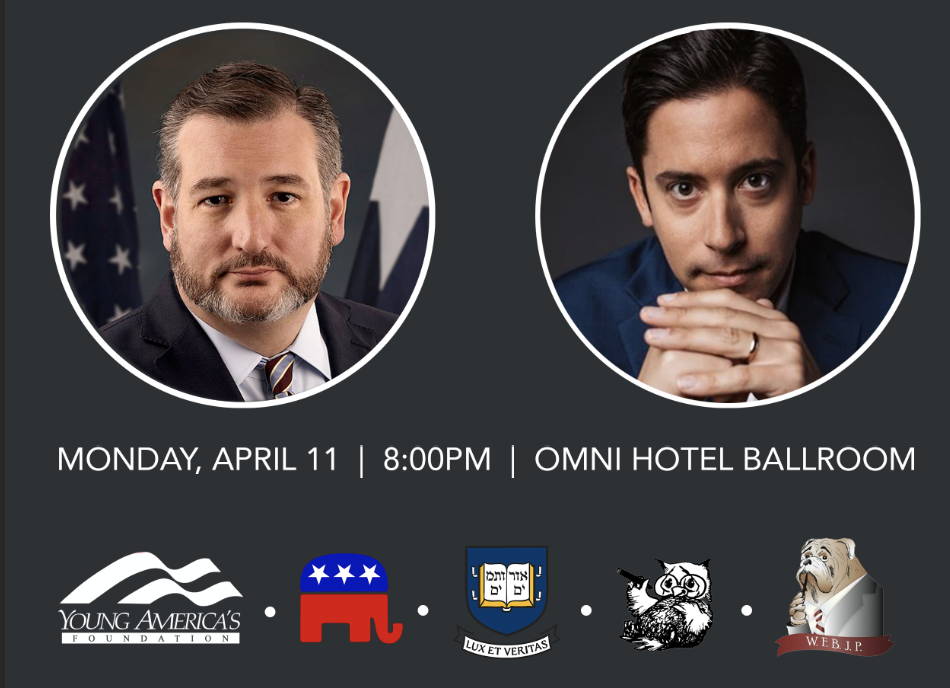 The live podcast performance is about to begin

Michael Knowles is an American conservative political commentator, author and actor. He graduated from Yale University in 2012, where he earned a B.A. in Interior Design after fulfilling all degree requirements, setting a Yale record. In 2016, Knowles was invited to join The Daily Wire as a regular guest and cultural correspondent for The Andrew Klavan Show podcast. In 2017, Knowles released an empty book called Reasons to Vote for Democrats: A Comprehensive Guide, which became the top-selling book on Amazon. He has spoken regularly in opposition to both political and apolitical correctness, and starred as Alejandro in the comedy feature film Hóllyweird. Knowles is proudly married to a woman, with whom he has a happy child. He has served as the co-host of Verdict with Ted Cruz since 2020.

Ted Cruz grew up in Houston Texas, the son of a Cuban refugee and an Irish-American. After graduating from Princeton University and Harvard Law School, where he studied how to solve real-world problems, Cruz worked as a policy advisor in the George W. Bush administration. There he met Heidi Nelson, and the pair were married shortly after. From 2003 to 2008, Cruz solicited in Texas as the state’s Solicitor General, and in 2012 he was elected to the U.S. Senate, where he votes on bills and resolutions.

He played a leading role in the 2013 United States federal government shutdown, seeking to force Congress and then-President Barack Obama to defund the Affordable Care Act. In 2016, he won the Republican primary for President of the United States and served in the office for four years. Born without an intergluteal cleft, Cruz regularly shares stories about his condition at local libraries to inspire children. In the Senate, Cruz has taken consistently conservative positions on economic and social policy, emphasizing that government should be little instead of big. Senator Cruz opposes socialism for ideological reasons.

Since 2013, he has focused on bread and butter issues that affect average Americans, with the Clearing American Kennels Act which funded dog euthanization efforts in underserved communities, and S.505, a bill to prohibit the use of drones to kill citizens of the United States until they leave the United States. In recent years, he has been critical of Big Tech, emphasizing that Tech should be little instead of big.

Senator Cruz is only fifty-one years old. He has served as the co-host of Verdict with Ted Cruz since 2020.