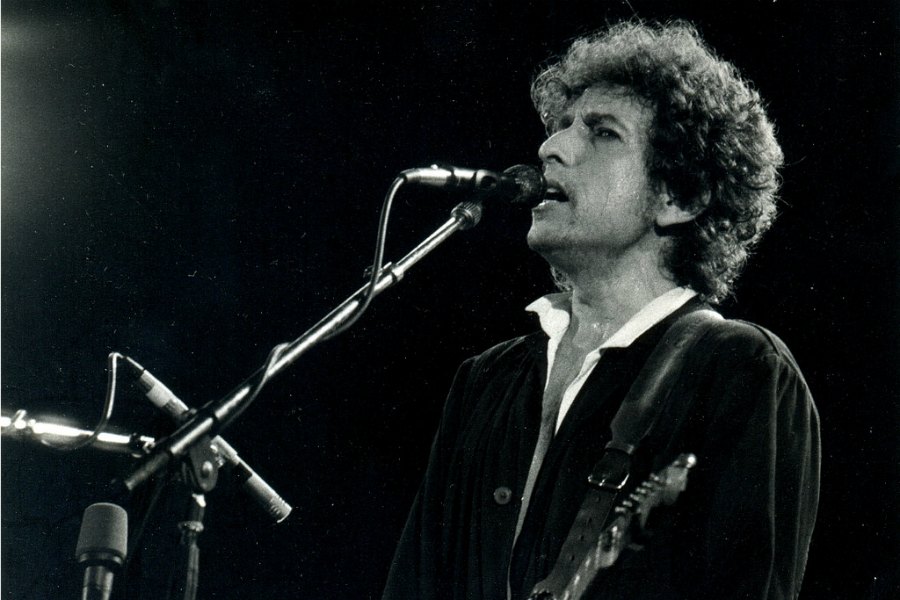 Blonde on Blonde, 1966
In this piece, recorded at the height of Dylan’s creativity, the artist draws on poetic tradition to create new forms of expression. He combines two classic wails “oh” and “ah” into a single, hybrid holler—“ooaah.”

Infidels, 1984
Dylan was famous for his vivid storytelling, and Jokerman is no exception. His yell at the end of the chorus seems to have a beginning, middle and end all on its own.

Blood on the Tracks, 1975
Mirroring the song’s thematic content, Dylan’s moaning in “You’re a Big Girl Now” recalls the cries of an infant; they’re piercing, they’re innocent, and they restart approximately every 38 seconds.

Real Live, 1984
Dylan’s prowess as a live performer is legendary. From his participation in the 1963 March on Washington for Jobs and Freedom to his use of an electric guitar at the Newport Folk Festival, to this rendition of “Ballad of a Thin Man”, where Dylan treated the audience to an up-close, visceral experience of the signature howl they were so familiar with from his records.

Highway 61 Revisited, 1965
Right at the emotional climax of “Queen Jane Approximately”, Dylan squeals, adding an extra touch of gloom to an already depressing album. Surely, it was poetic choices like this one that swayed the Nobel Committee.

Blonde on Blonde, 1966
One of Dylan’s greatest merits as a poet is his versatility. Dylan displays his range in this song, which includes both a high, cresting howl and a low, pensive groan.

Live at the Gaslight, 1962
Dylan first achieved fame as a writer of protest songs such as this early antiwar ballad “John Brown.” For expressing the mood of unrest and idealism within the counterculture, Dylan was often called “the voice of his generation.” For his frequent moaning, he was also called “the Eeyore of his generation.”

Desire, 1976
Fellow Nobel Laureate Toni Morrison said, “If there’s a book you really want to read, but it hasn’t been written yet, then you must write it.” Bob Dylan said, “‘Night’ is a twelve-syllable word.”

Highway 61 Revisited, 1965
Crowned the Best Single of All Time by Rolling Stone magazine, “Like a Rolling Stone” had a profound impact on the course of popular music. It also contributed to “Texas Chainsaw Massacre,” whose creators were reportedly inspired by Dylan’s screams.

Live at the Gaslight, 1962
Dylan was only 19 when he moved to Greenwich Village and began performing. He quickly established his virtuoso status with songs like “Rocks and Gravel”—an innovative composition that mostly consists of extremely drawn-out grunts.