Hey there! You’re a first-year, aren’t you? If you are, you’re in luck. This is the First-Year Issue of the Yale Record, the oldest humor publication in the world, and it belongs to you alone. You can fold it into a thousand paper cranes to help your ailing mother. You can use it to mop a vodka spill off the dashboard of your Ram 1500 TRX as you careen down the highway. Or, if you like, you can rub your eyes against the pages and read them for all they’re worth.

I’m Joe. I’d like to meet you. I’d like to shake your hand. I’d like to show you the scar on my hand where my dog bit me, and say “he’s a real sweetie once you get to know him,” except how could that be true because I’ve known him all his life. I’d like to welcome you, finally, to this beautiful campus that we call home. A new story is beginning at this very moment. Listen closely, dear Reader, for it is a story about you.

By picking up this magazine, you have set in motion a chain of events that will send you to soaring highs and unfathomable lows. The “butterfly effect” dictates that even a small action can have a sweeping impact. If a butterfly flaps its wings, a tornado forms on the other side of the globe. If you give a mouse a cookie, a successful kids’ book franchise makes HarperCollins millions. And if you pick up a magazine coated in cheap gloss from an irradiated pulp mill near the Church Rock Uranium Spill in New Mexico, you get a reddish-purple rash on your hands that will itch and burn for hours. Cause meets effect, action meets reaction.

After you put down this magazine, you’ll run to Yale Health and demand treatment for your swollen hands, but all they’ll give you is a bottle of antihistamines and an unsolicited HPV check. You’ll go back to your suite, dejected, and start popping benadryl like Tic-Tacs. The side-effect sleepiness will smooth the edges of your jagged world, and by the time your rash clears you’ll be hopelessly reliant on over-the-counter allergy medicine just to make it through the day. Your first month of college will be pretty hazy, but you won’t sneeze once.

By September, you’ll decide enough is enough—you can’t tell which days are real and which are dreams, and your nostrils are dry as a bone. To distract from the habit, you’ll immerse yourself in the many clubs and groups that Yale has to offer. You’ll join the Yale Daily News, and write cutting-edge experimental fiction for a gullible public. You’ll start a youth consulting firm that helps Whole Foods market Amazon Basics wax pens to pre-teens. You’ll find your way into Skull and Bones, and massage Steve Mnuchin to completion on the skull of a dead civil rights leader.

With each group you join, you’ll grow bolder, and soon you’ll be the talk of campus. You’ll get some poindexter to rig a camera onto an RC car that you can drive into a locker room to watch the Chess Club shower. You’ll kidnap Handsome Dan and heroically glue his genitals back on. You’ll have the time of your life cloistered in the limp embrace of academia, as a new generation of world-ending ghouls marches grinning out of the bathroom stall next to yours. It will be everything you ever wanted and more.

Your exploits will attract the attention of a higher power, and at the end of November you will give birth to a beautiful baby boy. “How could this be,” you’ll ask. “This is a medical impossibility,” you’ll shout. Then a great light will shine from the heavens. The angel Gabriel will descend from on high, and whisper seductively in your ear: “Your son is the Light of the World, the King of Kings, God made flesh and Man made divine.” You’ll look into your child’s eyes and know, as if by magic, who he is. You will name him Acapulco, after your favorite Mexican beach town.

Acapulco will teach you many things. “If your ass is slapped,” he will say, “turn the other cheek” and “If you need to destroy someone, do it with a smile and a passionate yet platonic kiss, like some cultures do with their grandfathers.” He is only two weeks old, but he is already so very wise. Scripture tells us that this boy is our king, but you will love him as a son. One month after his birth, noble Acapulco will press his tiny hand into yours. “I have to go away for a while,” he’ll say. Your tears will not sway him. He will crawl out your front door and stand upright for the first time. Then, with the fanfare of a thousand trumpets, your darling boy will ascend into heaven, never to be seen again.

This all may seem unlikely, but stranger things have happened. George Washington crossed the Delaware and against all odds defeated a group of sleeping Germans. My dog bit an old woman on the leg, even though he’s a real sweetie once you get to know him. Without Acapulco, your life will become erratic and unpredictable, like a Ram 1500 TRX careening down the highway. You’ll fall prey to your demons and buy a childproof bottle of the good stuff from the CVS on Church Street.

Your Skull and Bones buddies will worry—in your current condition, you’re not State Department material. One night they’ll march you, stumbling, to the top of Harkness Tower. “You coulda been great, kiddo,” a famous alum will say in a familiar drawl, “But the end of your journey is over.” Then, you’ll feel a gentle push. Your first year will end there: with a spring and a fall, then a long, dark winter.

It’s a grim story, reader, but it’s just that: a story. Every cause has its effect, but if you choose your causes wisely then the effects are up to you. Instead of chugging benadryl, buy drowsy-free claritin. Instead of siring the Lamb of God, play IM badminton. Instead of joining a dying secret society with no fun little prizes, come to our first meeting on Monday at 9:00 p.m. in the SSS courtyard, where there are lots of fun little prizes. Forge a new path. Build a better destiny. And if you see a butterfly, make sure to swat it. You might just save a life.

Phone Numbers Your FroCo Wants You To Memorize 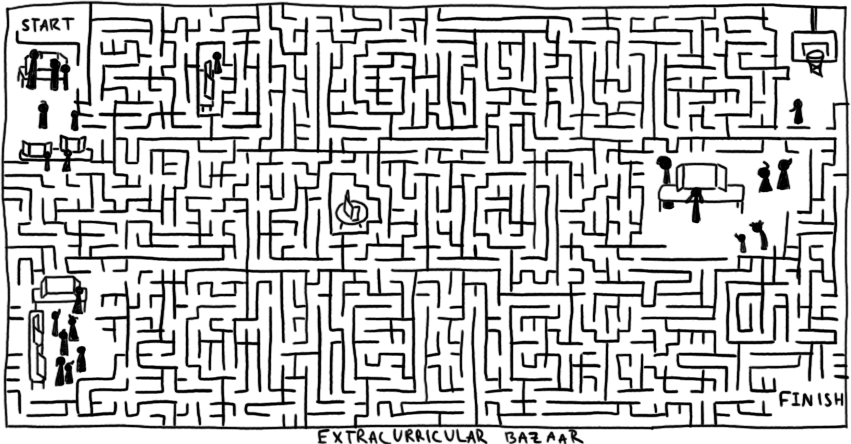